I really need to get working on that Light Box goal. My photos are so over-exposed when the light is not good. I am so lucky to have a group of friends that get together twice a year at a gorgeous cottage to scrap the days away. We eat great food and have such a wonderful time together.

While I was packing, at the last minute I thought I would throw in some UFO's (unfinished projects). You know the cards that you coloured and never put together or were making multiples and miscounted. Well, I had quite a stack and needed to get them done or throw them out! 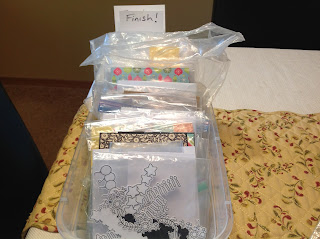 Believe it or not, this is the AFTER bin!

The good news is I was able to complete 58 cards, some new but mostly I just wrapped up some of the unfinished ones. Feels so good to get them DONE! 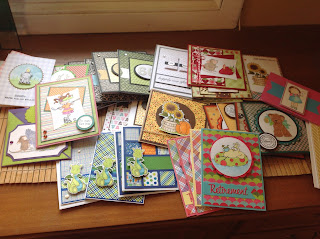 And while it's totally out of season, I had these pumpkins coloured and finally put them into cards.
Aren't they sweet? 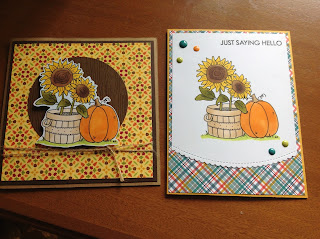 Now, I have a large stack of cards to organize and maybe I'll even sit down and send out one or two.