I got this recipe from a friend waaaay back in my university days. Jean was a mature student who struggled with the culture and the study needed to be successful as she had been out of school for some time. On the other hand, she had some great recipes because she was at a stage in her life when she had already cooked for herself for a number of years.

This is one recipe that I pulled out to join the low carb craze. I think this recipe fits the bill. I used store bought chili sauce to test it out since it's been awhile but next time, I'm going to use my homemade chili sauce and I think it will be even better. Like everyone else, I eat a lot of chicken so every now and then its nice to mix things up with a pork chop. 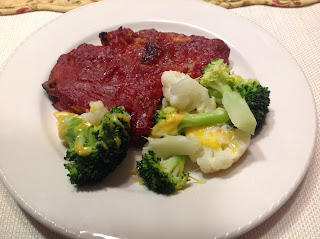 1/2 cup chili sauce
1/4 tsp dry mustard
2 Tbsp ketchup
garlic powder to taste
chili powder to taste ( I was out so I put in a dash of Franks hot sauce and some hot pepper flakes but not necessary)
1/4 tsp Worchestershire sauce
Mix well.

Brown pork chops in frying pan. Cover with chili mixture and bake in covered dish at 350F for 1 - 1.5 hours. Baste frequently and turn once if you wish.
You can change up the recipe to suit your tastes. The sauce should be tangy.

I hope that you did well, wherever you ended up, Jean.