Just in time for Thanksgiving, as promised, here's my tried and true Crockpot stuffing recipe. It originally came from Country Woman magazine and once I found it, I have never stuffed another bird. It's tastes very much like a traditional stuffing but is way easier then wrestling with a raw bird at 6 am. Some people that I have passed this along to add a pound of bacon(pre-cooked), some people add a couple cans of mushrooms etc. It can be doctored to suit your family's taste. It sure makes things easier when you have a small kitchen and a lot to prepare at the last minute. Since I haven't actually made it yet, here's a photo of my good 'ole crock pot. Nothing fancy here. 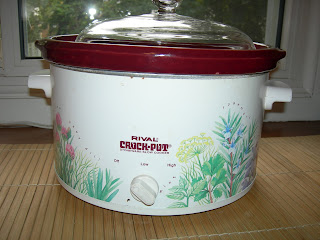 Crockpot Stuffing
4 celery stalks, chopped
2 medium onions, chopped
3/4 cup butter or margarine
about 13 cups of day old bread, cubed ( I use French or Italian, it's a little drier and bigger cubes make for drier stuffing) you can also toast it lightly in the oven first
1 1/2 tsp. salt
1 1/2 tsp sage
1 tsp poultry seasoning
1/2 tsp pepper
(I just dump in a bunch of seasonings to taste)
2 eggs
1 can (14 1/2 oz) chicken broth

In a large skillet, saute veggies with butter until tender. IN a large bowl, toss bread crumbs with seasonings. Add veggie mixture. Combine eggs and broth and add to above. Transfer to slow cooker. Cover and cook on low for 4-5 hours. If you like it crispier, turn it up and turn it a couple times.
You can't really go wrong with this recipe. I hope you try it.
Posted by Dianne at 14:19 No comments: