Winter coats for the dogs

Now that the snow has started to fly, I've had to pull out the winter coats. Yes, my dogs each have a winter coat with a lining that zips out. It is so handy when it's raining to have the outer shell which has a wide belly band that also prevents some of the splash up, then the warm fleece lining on those really cold days. 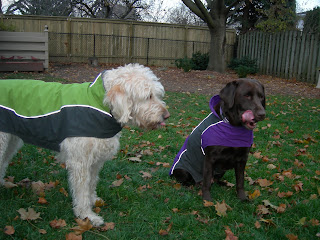 They also have a reflective strip which is great especially at 6:00 in the morning when we're out walking. The dogs don't mind at all and I think they enjoy being all warm and cozy in their jackets. 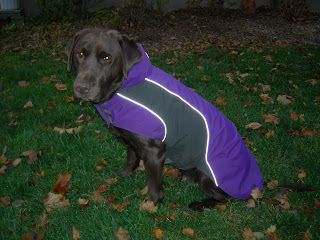 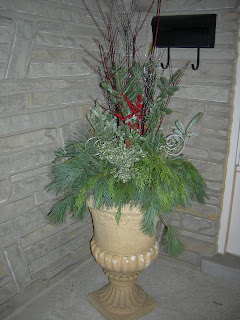 Every year, I pick up my gorgeous urn arrangement from a lovely little garden and gift store down in Cambridge called The Living Outdoors Garden Store. They always burn the most delicious smelling candles and have many unique items and giftware as well as fresh greenery. The gentleman who does the arrangements does a beautiful job. You can custom order what you would like or just pick up one of the many varied arrangements that he comes up with. They are very reasonably priced and each one is unique. The photo doesn't do it justice but here's another try.... 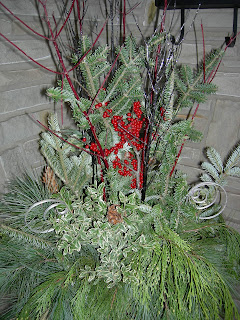 While I'm there, I pop across the parking lot to Valley Feeds, formerly known as Grand Valley Fortifiers. They have a great selection of bird seed, feeders, dog treats and food and you can even pick up some supplements for your horse. I buy my brother a big bag of custom made birdseed for his birthday so he can enjoy feeding the birds throughout the winter. Love shopping at the non-mainstream non-box stores. I hope you will too. Check them out.
Posted by Dianne at 13:36 No comments:

With the holiday season coming up, many of us are asked to contribute something to a potluck meal or even bring dessert for a special dinner. This quick and easy dessert looks and tastes good and doesn't take hours to prepare. The recipe is on the box of chocolate wafers but basically you just whip up some whipping cream, add a little icing sugar and a dash of vanilla and ice each wafer then stack them in logs side by side. Slather everything with whipping cream and let it sit for at least 6 hours. 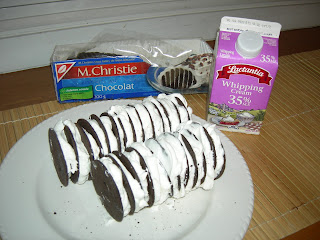 You can sprinkle with some decorations but word of warning, do this just before serving or the whipped cream will make it bleed. Cut on a diagonal to get a nice looking slice. 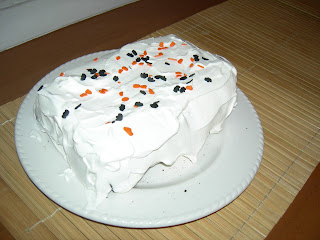 A very tasty dessert that you can throw together in minutes. Sure to impress.
Posted by Dianne at 13:22 No comments: 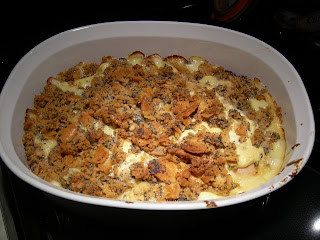 Now that the snowflakes are starting to appear, it's time to break out the comfort food. I call this "mashed potato" weather but it's also a good time to eat egg noodles with this yummy one pot wonder.
It is somewhat caloric but you could always use a lower fat soup and sour cream, just don't cut down the buttered Ritz cracker topping. It "makes" the dish.
Here's the recipe:

Pre-brown chicken in a fry pan with a little butter. Place in a oven proof baking dish.
Mix sour cream and soup, pour over chicken. Mix crumbs and melted butter. Spread cream mixture over top of chicken. Sprinkle poppy seeds. Bake at 350F for 1 hour or until done.
Serve with noodles. 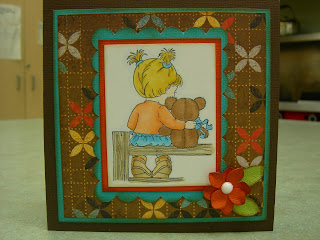 I know, that's a pretty lame title but I borrowed this stamp a long time ago and now I can't remember who it is... maybe Penny Johnson? I coloured her using my copics and layered the Martha Stewart Hydrangea punch to make the orange flower. So cute!

Hope in the Colour of Orange

As many of you know, I am very proud of my Dutch heritage. My Dad is a wonderful example of many of the excellent qualities possessed by the Dutch people; hard-working, determined and proud.

I recently signed a book out from the public library called Hope in the Colour of Orange. If you watch the World cup, you will know that at many of the Dutch sporting events, spectators are dressed in orange after their heritage which is the House of Oranje. The title is also associated with oranges which were given to the Dutch children by the soldiers shortly after Liberation.  This book was written by civilian children and young adults who endured the deprivations of the Second World War. I was very interested in this period of history as this is the time my father was a young man in Holland. It was an interesting collection of short stories written by several people who emigrated to Canada shortly after the War and wanted to share their memories. 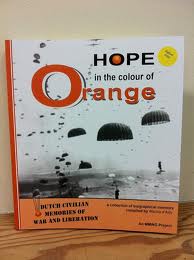 Many of their stories parallel what I have heard from my relatives. I was very fortunate to travel to Holland with my father in 2000 and was present for Liberation Day where the Dutch people celebrate and remember their freedom and the role Canada played in the Liberation of their country. 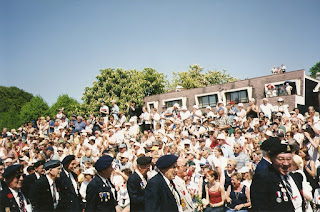 What a moving time to see the aging Canadian veterans being cheered by the Dutch people as they paraded past and towns decorated with hundreds of Canadian flags. The Dutch people were yelling out "Thank you for our Freedom!" It was a moment I will remember forever and made me very proud to be a Dutch/Canadian.  I hope as Remembrance Day approaches, we continue to remember these brave men and women; both soldiers and civilians who sacrificed so much for freedom. 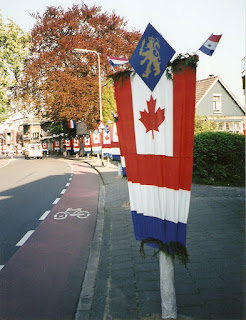