In January, Corrina and I came up with a scheme to set some goals for the coming 12 months and decided to call it Twelve in Twelve. We both made a list of 12 things that we would like to accomplish. I made mine mostly about scrapbooking and crafting but since then I have heard of many friends who have embraced this idea and made it their own.

Some chose to do their 12 in 12 focusing on household maintenance and upkeep, some wanted to accomplish some athletic goals like running a half marathon and trying a new sport, some wanted to achieve some personal goals like sending more cards and re-connecting with old friends. It's a really neat idea but now that half the year has come and gone, it's time to re-evaluate my progress. Between working full-time, raising a litter of 9 pups and preparing for the fund-raiser, I didn't have too much time left to work on these tasks. I AM reading more, I have started the Disney albums, I'm "thinking" about my heritage albums and I have bought the yarn for an afghan (does that count?). I have taken a couple classes but there is still plenty of room for improvement. It will be interesting to see what the next 6 months hold in store. 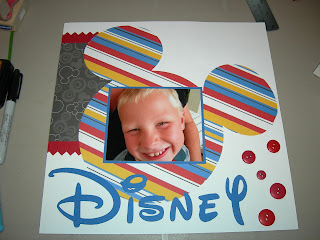